Tri Harder Promotions did a great job of providing multi sport athletes of all levels the opportunity to compete in central Illinois. Three races shared the same venue on July 28 with staggered start times. The Stoneman Sprint, Iron Abe Olympic and Route 66 Half Distance races started at Lake Springfield with each distance course being well-marked and color coded.

The 70.3 distance started first with age-gender waves of deep water starts. This was followed by similar starts for the Olympic distance and then the sprint. Colored buoys, guards in the water and a lead kayak kept swimmers on the right path. A bit of algae on the ramp out of the water made exiting the swim a bit tricky. Race organizers did a good job of mobilizing volunteers to assist athletes in safely navigating the slick surface. Bike racks in the transition corral were separated and marked by distance. 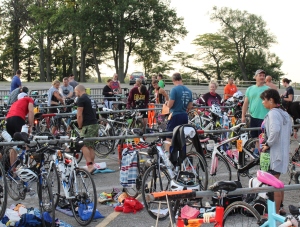 The bike portion of each distance started in the lake area and quickly headed to well paved, but sparsely traveled rural roads. The half distance broke off for a 20 mile diversion in the fifth mile, while sprint and Olympic distances traveled together. Color coding and volunteers at points of decision really helped take any confusion out of the three distances sharing the course.

Similar, well-marked sharing of roadways around Lake Springfield made the run easy to follow. The 6.2 miles of the Olympic distance were pleasantly shaded with rolling hills and adequate water stops. There were even a couple misting stations thanks to thoughtful residents.

I completed the Olympic course last year, so I set a goal to better that time if possible. My swimming was a little stronger and a lot straighter this year so I dropped a couple minutes on the first leg. Cycling showed me the price of under-training. I started strong but was unable to keep the pace, with the last 5 miles being a bit of a struggle. Fortunately, I was able to complete the twenty-five miles about fifteen seconds under last year’s time. Cooler air temperature had to be the reason I dropped another two minutes off the run. Regardless the reasons, I was happy with a PR of almost five minutes under last year. 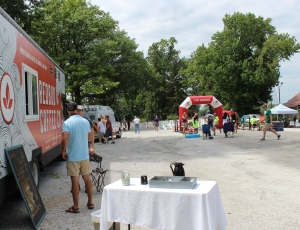 Great event, satisfying performance and some personal perks made for an excellent day. I got to see my niece and say hi as I exited the first transition. I discovered Redbud Coffee, a local roaster with a mobile shop at the race site. Plus I was able to have lunch with my son Andy and his gal Halli on my way home.

This site uses Akismet to reduce spam. Learn how your comment data is processed.